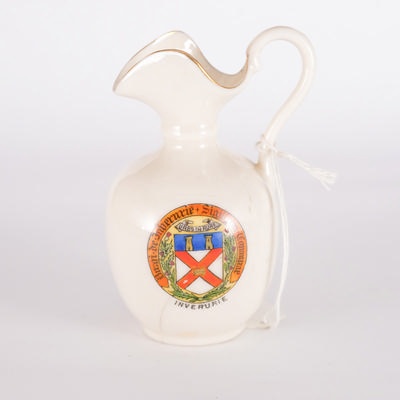 This jug would have been sold in a tourist shop for visitors to Inverurie in Aberdeenshire.

From Heraldry of the World:
Inverurie, granted to David, Earl of Huntingdon, by his brother, King William the Lion, between 1178 and 1182, appears to have been a Burgh by 1195 and is considered as a Royal Burgh from that date.

The arms show two towers, called castles, as shown on the device on an old Burgh seal. The town has long been recognised as the capital of the Garioch, a district which once had two castles for its protection, the Castle of Inverurie on the Bass and the Castle of Dunnideer, the capital of the Picts. These castles are said to have been also seats of the Mormaers of Mar and Buchan and later of the Regality courts of the Earls of Mar.

The blue and gold colours are those of Mar, and the golden and red castles recall the Lords and Earls of Garioch.

Nautilus porcelain made by McDougall & sons in North Glasgow between c. 1896 and 1913. This factory produced some of the finest porcelain in Britain.

On side:
{Coat of Arms of Inverurie}

Shield with red cross and a gold crown on bottom section with a blue band above featuring two castle keeps.

Above the shield is a scroll with 'URBS IN RURE'. Around the shield are thistles with the following latin wording on an orange background:

Base of pot:
NAUTILUS
PORCELAIN