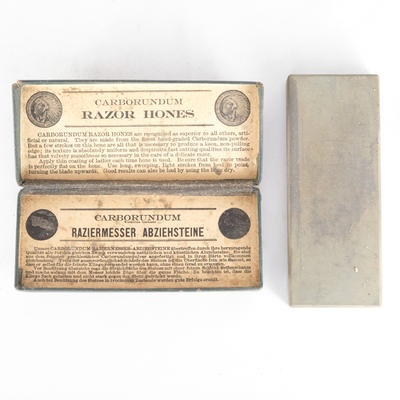 Razor hone donated to the museum in 1995 from the estate of L A Henderson.

Early in 1891, Edward Goodrich Acheson, a young scientist and inventor in Monongahela City, Pennsylvania, was attempting to create artificial diamonds using electricity. As a byproduct, his experiments produced small crystals that could cut glass, and even diamonds. On the assumption that the new crystals were formed from a combination of carbon and corundum (that is, natural aluminum oxide), Acheson called his product Carborundum; it was not until a year later that chemical analysis of the crystals showed them to be in fact silicon carbide—the world’s first artificially produced mineral.

The Carborundum Company—Acheson kept the name because he liked the sound of it—was formed in September 1891 with $150,000 raised by Acheson and a group of Monongahela investors, who paid $100 for each of 1,500 shares. Two years later Carborundum secured a $7,000 contract with George Westinghouse, who had been hired to light the Columbian Exposition Building in Chicago, for 60,000 of Carborundum’s new grinding wheels. Acheson used this money to buy the company’s first dynamo; however, he soon sought a cheaper and more plentiful source of electric power, and when a hydroelectric dam was constructed at Niagara Falls, Acheson proposed to move the company closer to this power source. When his board of directors objected, Acheson formed a new board and contracted with the Niagara Power Company for 1,000 horsepower. Acheson turned to Andrew Mellon for backing to finance the move, and the Mellon family retained 20 percent ownership in the company throughout the next century.

Razor Stone:
There is no British Museum Materials Thesaurus entry for Carborundum, Silicon or Carbide closest is:
inorganic, mineral, silica