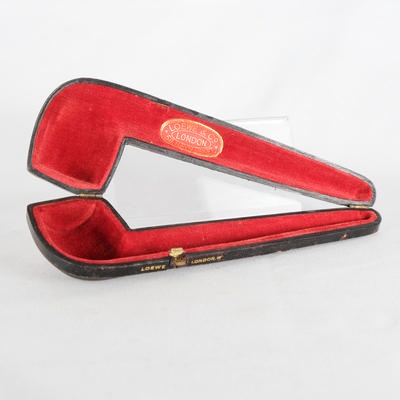 A black pipe case made by Loewe & Co London. Location of pipe unknown as only the case was donated.

Loewe is one of the haunting old names of British pipe-making, characteristic of an almost vanished "upper middle class" of the trade, which also incorporated makes such as BBB, Orlik, Comoy's and GBD. Along with these brands, Loewe has long dwindled into pseudo-existence, becoming little more than a logo occasionally used by the Cadogan factory in Southend-on-Sea. But owners of older Loewes treasure them as superb, featherweight smokers, excellently crafted and with grain characteristics superior to those of many contemporary Dunhills.

The Frenchman Emil Loewe founded the company, both shop and workshop, in 1856 at the Haymarket 62, London. He is said to have been the first to make briar pipes in England. Richard Hacker maintains that theatre people from the West End were among the shop's heyday aficionados. Loewe's spigots are especially well regarded by lovers of elegance today - they were originally introduced for practical reasons, to facilitate the production of replacement stems for customers abroad.

Factory was at 58 Haymarket

Outside by opening:
LOEWE LONDON.W

Inside case:
On a red sticker with gold lettering and outside edge
LOEWE & CO
LONDON
58 HAYMARKET