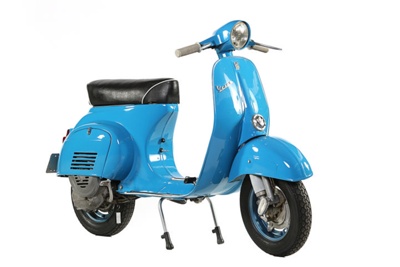 By 1967, Piaggo had produced three million scooters in two frame configurations and varying engine sizes, the smaller models being ideal as city runabouts and the larger ones suitable for more adventurous distances. The 90SS has a 90cc two-stroke engine and a four-speed gearbox with a twist grip changer. Its top speed is around 93kph (58mph).

Vespas were manufactured under license in several countries including New Zealand where the licensee was Airco Ltd in Newmarket, Auckland. They were assembled from completely knocked down (CKD) kits with various parts manufactured locally as required by government rules at the time. The NZ Model 90SS can be distinguished by its lack of the ‘dummy tank’ and spare wheel, which were left off to keep down the cost. The normal 90SS had a compartment shaped like a motorcycle fuel tank between the handlebar and seat where a motorcycle fuel tank would be, compromising the ‘step through’ aspect that define most scooters. There was also a spare wheel under the tank along the axis of the machine rather than the usual east-west mounting on the rear typical of other Vespa models. The seat base on this example carries an Airco stamp and its chassis number confirms that it is a NZ-made scooter.

The 90SS is one of the rarest Vespa models with only around 6,000 ever produced, making it a sought after collector’s piece and many of the NZ-made examples have been purchased by overseas collectors. This 1967 example was purchased for the Nelson NZ Motorcycles collection from a collector in Nelson, NZ, in December, 2008. It was acquired by Transport World for the Classic Motorcycle Mecca collection in May, 2016.

Manufactured in Italy, assembled in NZ