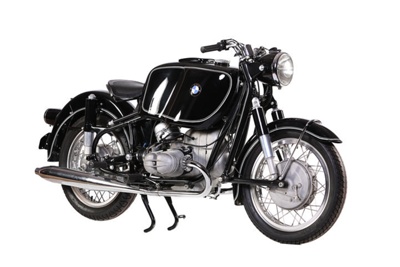 Along with the R26 and R50 introduced in 1955, the R69 featured the 245/1 chassis with Earles front forks and swinging arm rear suspension which dramatically improved the bikes’ ride and handling and became a defining trait of BMW motorcycles during the following decade. With its sensational new suspension, the R69 considerably advanced the flagship market position established by the R68 with its refined and powerful 594cc, twin-cylinder, and ‘boxer’ engine.

Although the R69 enjoyed a highly-respected position in the motorcycling world, it was expensive and the 1950s were a difficult time for motorcycle manufacturers as increasing prosperity and inexpensive cars lead consumers to move away from motorcycles. Only 2,819 examples were sold during the model’s five-year production period before it was updated as the R69S.

This example was fully restored by a BMW specialist in 2009. It features a very rare factory-option VDO tachometer driven from the timing chest, and a large-capacity Hoske Rennsport petrol tank complete with oversize badges. It was acquired for the NZ Classic Motorcycles collection in May, 2009. It was then acquired by Transport World for the Classic Motorcycle Mecca collection in May 2016.