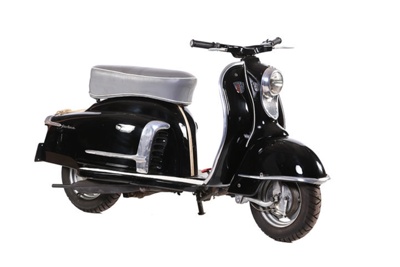 Lambretta entered production licence arrangements with several companies around the world, including with NSU in Germany. Although NSU had been a significant motorcycle manufacturer since 1901, as it rebuilt itself after the Second World War it chose to enter into an agreement with Lambretta in 1950 to produce the Italian company’s products as part of the NSU range. When the agreement expired in 1956, NSU developed its own scooter and named it ‘Prima’– the top of the line. However, it incorporated a lot of design features found on Lambrettas and it was known in some circles as the ‘German Lambretta’.

While the first model, the Prima D, had a three-speed gearbox with twist grip change, subsequent models introduced from 1957 had a four-speed gearbox with a rocking foot change mechanism. The Prima III, IIIK and IIKL had a 146cc, single-cylinder, two-stroke engine while the Prima V had a 175cc engine. This 1960 Prima IIIK is powered by a 146cc engine that develops 6.3bhp at 5,000rpm and provides a top speed of 84kph (52mph). All models feature a final drive with a drive shaft and bevel gears and trailing arm front suspension while the cast final drive housing acts as the rear swinging arm and is fitted with a hydraulic damper. The standard seat fitment was two separate saddles but a single cross seat, as is fitted to this example, was available for a small additional charge.