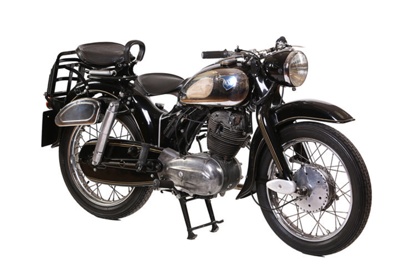 NSU was one of the world’s leading motorcycle manufacturers before the Second World War and as Germany recovered after the war the company continued its tradition of introducing innovative machines while rising again to be the world’s largest motorcycle manufacturer by 1955. The 250cc Max was introduced in 1952 with a single-cylinder engine that has a single overhead camshaft operated by eccentrics and connecting rods in a design the company called ‘Ultramax’. It had a pressed steel frame and leading link front forks while the swinging arm rear suspension featured a cantilever system with a central spring.

In 1954, the Max was upgraded to the Max Special that featured full hub brakes and a larger tank and two years later the Super Max was introduced with its engine power increased solely through carburettor and air filter modifications, and the rear suspension was changed to a dual-spring swinging arm. The 247cc engine on the Super Max developed 18bhp at 6,750rpm which, combined with the four-speed gearbox, provided a top speed of 126kph (78mph). The NSU Max series was known for its high-quality engineering and construction, its stable handling and excellent braking. The frame construction and suspension design strongly influenced the design of the Honda Dream 250cc and 305cc twins of the 1950s.