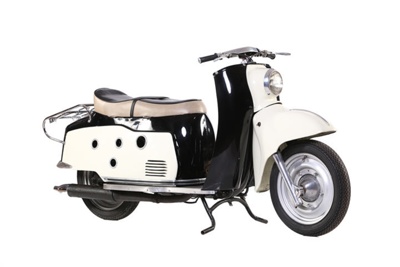 Maico was a small, family company in Germany that became famous for manufacturing fast, high-quality motocross and off-road motorcycles. In 1955, the company launched scooter production aiming directly at the top end of the market and the Maicoletta soon became known as the ‘Rolls Royce’ of scooters. The design was influenced by the company’s motorcycle expertise to the extent that the scooter was equipped with telescopic front suspension, swinging-arm rear suspension and 14-inch wheels. Engine options included 174cc, 247cc and 277cc single-cylinder two-strokes.

The engine and four-speed, foot-operated gearbox were derived from the Maico Blizzard off-road bike and the 247cc version was capable of a top speed of 68mph (109kph), which was unusually fast for a scooter. Interestingly, it features a Bosch oscillatory starter system that rocks the engine back and forth until a separate ignition system fires it to operate normally in the forward direction, avoiding the need for the six-volt electrical system to try and turn the engine over against its compression. Luxury fittings include polished aluminium body trim and an optional eight-day clock. It was so popular in the UK that, after production ended in 1966, the importer continued to assemble them from parts until 1967.