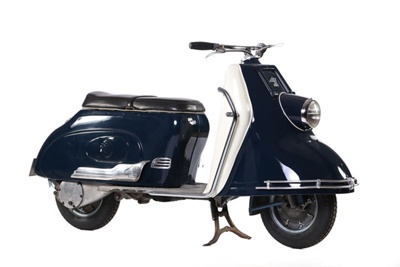 Following the Second World War, German industry was not permitted to manufacture aircraft so Heinkel turned its attention to producing bicycles, scooters, mopeds and even a microcar. From 1953 until 1965 Heinkel produced over 100,000 scooters alone and, combined with the other two wheeled production, it became a major manufacturer in Europe for more than a decade but eventually turned its attention and skills once more to producing aircraft, building F-140 Starfighters under license.

The Tourist 175cc Scooter was manufactured from 1953 to 1965 and this 103 AO model was manufactured from August 1955 to September 1957. The engine is a single-cylinder, four-stroke that produces 8.2hp at 5,500rpm and drives through a four-speed, constant-mesh gearbox and chain final drive running in an oil bath within the rear suspension arm. The electrics are 12-volt Bosch and it features an electric starter. It was more expensive than its Vespa or Lambretta competitors, or even Heinkel’s smaller two-stroke models due to the more costly four-stroke engine, four-speed transmission and enclosed rear chain but it was well regarded because of its build quality, comfort, performance and stability.