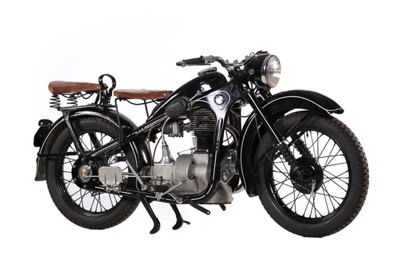 The R35 was one of the very few shaft-driven, single-cylinder motorcycles manufactured by BMW. All of those except the R2, R3, R4 and R35 were of 250cc, being essentially one half of a boxer 500cc engine placed vertically. Following the limited commercial success of the 305cc R3, BMW introduced the R35 in 1937. Its engine was derived from the 398cc R4 but with the bore diameter reduced to give a displacement of 340cc. Nevertheless, its output and top speed equalled that of the R4 at 14hp and 100kph (62mph), respectively. Although it was the last model manufactured with a frame made of pressed steel sections, the front suspension was upgraded from the earlier leaf spring to a telescopic fork although without hydraulic dampening. It retained the four-speed, hand-change gearbox.

The R35 was popular with the police and the military for use as a training and dispatch vehicle and more than 15,000 were sold by 1940. Following the Second World War, R35 production was restarted at the Eisenach factory, which was, by then, in East Germany. This resulted in the existence of two separate BMW companys until 1952 when the East German government gained control from the Russians and renamed the East German one Eisenacher Motoren Werke (EMW). EMW used a red-and-white roundel similar to the BMW one as its logo.

More than 80,000 R35s, including the R35-3 with rear suspension, were produced by the Eisenach works under the BMW and EMW nameplates by 1955. Around two thirds of them remained in East Germany where they were popular with state authority fleets. While the largest proportion of R35 exports were within the Soviet Union, around 5,000 were exported to Western Europe as a means of generating foreign exchange. If production in Munich and Eisenach are added together, the total number of R35s manufactured between 1937 and 1955 is around 100,000 making the R35 the most successful motorcycle in BMW’s history.

This example was acquired by the NZ Classic Motorcycle collection in Nelson, NZ, from Bad Aibling, Bavaria, Germany, in May 2008. It was then acquired by Transport World for their Classic Motorcycle Mecca collection in May 2016. The SAG designation is an acronym of Sowjetische Aktiengesellshaften, which were Soviet joint stock companies formed in East Germany as part of the Soviet Union’s claims for reparations following the war.