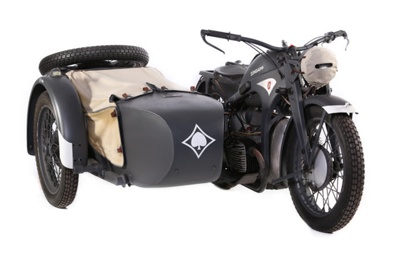 Zündapp was founded during the First World War to manufacture detonators and produced its first motorcycle in 1921 using Levis two-stroke engines of 211cc and 246cc capacity. In 1924, the company began manufacturing its own engines and sold more than 10,000 motorcycles that year. The first Zündapp four-stroke was produced in 1930 using a Rudge Python engine and by 1933 the company had manufactured 100,000 motorcycles. That year, it introduced its first horizontally-opposed, twin-cylinder, side-valve, four-stroke engines for the K-series motorcycles, the 'K' standing for 'Kardanantrieb', which means 'enclosed driveshaft'. The 1933 K models were the twin-cylinder K400 (398cc) and K500 (498cc), and the four-cylinder K600 (598cc) and K800 (804cc).

The four-cylinder K800 produced 20hp (later 22hp) at 4,300rpm. The four-speed, hand-change, unit-construction gearbox is of an unconventional, all-chain design with a separate chain for each ratio. The sturdy frame and single-spring girder forks are fabricated from pressed steel. Its top speed is around 115kph (71mph). Many K800s, usually with a factory-supplied sidecar, were used by the German military during the Second World War.