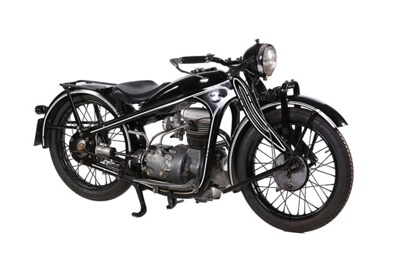 During the Great Depression, motorcycle manufacturers turned to the production of inexpensive motorcycles. That and the removal of the need to pay tax on, or have a licence for, a motorcycle under 200cc prompted BMW to develop the R2, the smallest motorcycle the company has ever made. Launched in 1931, the 198cc, single-cylinder, overhead-valve, four-stroke was sold at almost half the cost of the company's larger, twin-cylinder models but, like them, featured a one-piece crankcase and lubrication by a geared oil pump.

The drivetrain included a three-speed, hand-change gearbox, a single-disc, dry-plate clutch and shaft final drive. The pressed steel frame featured trailing-link front forks but no rear suspension. The 1931 models had exposed valves and springs but by 1932 they were enclosed. For a 200cc machine of the period, its peak output was a very acceptable 6hp at 3,500rpm and its top speed was 96kph (60mph). Peak output was increased to 8hp in 1933.

This particular machine was restored some years ago and registered for use on UK roads in 2002. It was used in the UK until 2005 and purchased by a private owner in Warrington, UK, in October, 2006. It was acquired for the NZ Classic Motorcycles collection from the Warrington owner via an auction at Quail Lodge in California in May, 2009. It was acquired by Transport World for their Classic Motorcycle Mecca collection in May 2016.