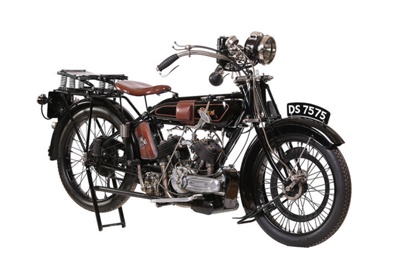 Raleigh motorcycles, like that of many others, began with the establishment of a bicycle manufacturer. It was located in Raleigh Street, Nottingham, from 1885 and in 1888 Frank Bowden became the principle investor and the Raleigh Bicycle Company was established in 1890. The first commercial product was introduced in 1901 featuring a Schwan engine mounted over the front wheel, which it drove via a belt. The company's motorcycles soon acquired a more conventional design and a forecar motor tricycle, the Raleighette, was also produced. However, sales were poor and the company suspended motorcycle production in 1906 to concentrate on bicycles. Of note during that period, the company developed and began marketing the Sturmey-Archer hub gearbox.

Following the First World War, Raleigh developed a 698cc flat-twin engine and supplied it to several other manufacturers as well as introducing it in a 1920 model with the engine mounted longitudinally in the frame. In 1922, two single-cylinder, belt-drive models were launched with a choice of either a two- or three-speed gearbox. The flat-twin model was expensive to manufacture and in 1924 it was replaced by a 798cc, 60-degree, side-valve, V-twin which, in turn, lasted in production until only 1927. The V-twin engine with a three-speed Sturmey-Archer gearbox was used in the Model 12 solo motorcycle and the Model 13 and 15 sidecar combinations.

This example was restored to a high standard when it was part of director Michael Moore's collection in the late 1990s. It was purchased for the NZ Classic Motorcycles collection via an auction in Staffordshire in April, 2009. It was acquired by Transport World in May 2016.