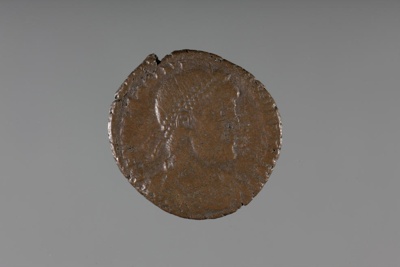 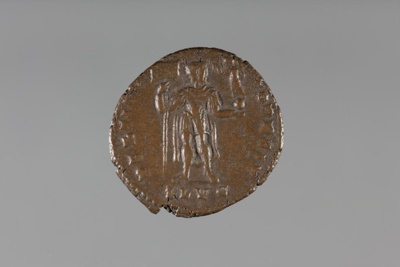 This bronze aes of Valentinian I, or Valentinian the Great, was minted at Lugdunum (now Lyon).

The obverse shows a bust of the emperor wearing a cuirass and cloak, with a pearl diadem. The diadem replaced a laurel wreath in later Roman portraits. On the reverse Valentinian is shown full-figured, standing with his head turned to the right. In his right hand he holds a labarum, or military standard, and in his left is the goddess Victory on a globe. Around him is written RESTITUTOR REIP, proclaiming Valentinian as Restorer of the Republic. A dotted border can be seen around the edge. The coin is worn, especially around the circumference, which has obscured some of the legend on the obverse, and there is some radial cracking.

Valentinian (Flavius Valentinianus) is often considered to be the last great western emperor of Rome, and also one of the last great warrior emperors. He ruled from 364-375 CE, inheriting an empire that had been suffering from 60 years of internal unrest. The succession crisis created on the death of the previous emperor Jovian caused chaos, and when Valentinian was selected, he agreed to elect a co-Augustus to prevent this from happening again. He chose his brother Valens for this role, giving him the eastern empire while Valentinian returned to the west to settle the unrest and regain the support of Gaul. The best way to win the support of the Gallic nobility was to perform the traditional imperial duty of preserving peace by defeating barbarians. This ideology is shown in the imagery of the coinage issued from Gaul during this period. Valentinian issued such series as RESTITUTOR REIPUBLICAE (Restorer of the Republic), GLORIA ROMANORUM (the Glory of Rome), and TRIUMFATOR GENT BARB (Triumphant over the Barbarian Nations) from the mints at Trier, Lyon, and Arles.