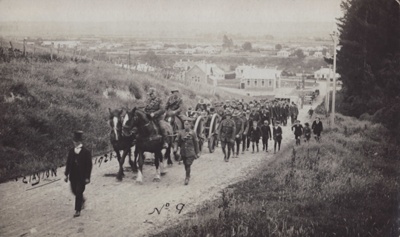 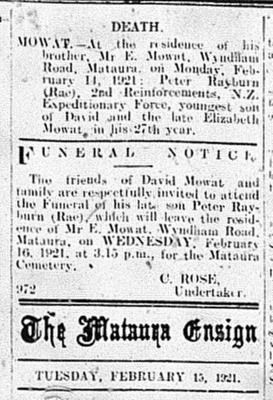 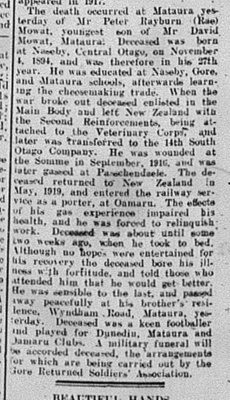 Photograph of Private Peter Raeburn Mowat's funeral procession travelling along Crawford Road toward the Mataura Cemetery on 16 February 1921. Private Mowat died two days earlier and was given a full military funeral because he died as a result of war injuries.

Prior to the Great War he worked as a cheese maker and enlisted in October 1914. He was wounded (shot in the right thigh) at the Somme in September 1916 and was later gassed at Passchendaele in 1917. His war service records don't refer to being gassed and note a disability caused by 'a lung infection/influenza'. His obituary removes any ambiguity and directly links his death to being gassed at Passchendaele.

Private Mowat remained in the army for the duration of World War One and returned to New Zealand in May 1919. He tried working as a railway porter but ill health forced him to relinquish all work. His family then cared for him in his home town of Mataura before his death aged 27.

Private Mowat's obituary and funeral notice from the Mataura Ensign help further convey the story behind this arresting photograph.

Handwritten on front of photograph, photographer's name and note: 'CLAYTON / 1921 / No. 9'

On reverse of photograph, on a white sticker, handwritten in black pen: 'F12 - 8A'