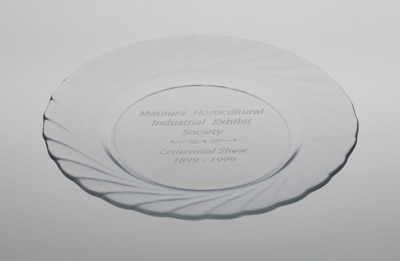 Plate; a display plate marking the Centennial Show of the Mataura Horticultural Industrial Exhibit Society which was held in 1999.

The Mataura Horticultural and Industrial Exhibit Society was one of the most active clubs in Mataura for over a century. The Society's inaugural meeting was held on 18 December 1891 and the first exhibition took place in Humphries Hall in Mataura on 17 February 1892. A full report appeared in the Mataura Ensign on 19 February 1892. The eight annual show was held on 15 February 1899 and was reported on by the Mataura Ensign the following day. Accordingly we are unsure why the 1999 show was celebrated as the Society's centennial.

The Society's annual show increased in size and scope each year until the Society was able to build its own Hall in 1905. By 1912 the show had become so popular that special trains ran from Bluff via Invercargill and from Gore. This advertisement from 1912 gives a sense of the occasion:

'Day excursion tickets are available for the Mataura Horticultural and Industrial Society's Annual Show on February 19. The best show of its kind in Southland. The Freezing Works, Paper Mill, Dairy Factory are all thrown open for inspection. View the Mataura Falls. A splendid display of Pot Plants, Floral decorations, Fruit and Vegetables, Jams and Jellies also Photography, Industrial and Juvenile sections'.

Up until the 1950s the annual shows were opened by the local MP. Competition was fierce and it wasn't uncommon for the judges results to be questioned. Support for the show started to wane in the 1990s and the Society wound up in 2001 for want of organisers.

Inscribed in the centre of the plate: 'Mataura Horticultural Industrial Exhibit Society, Centennial Show 1899 -1999'
Arcoroc being the brand name of the marker's tempered glass range is also inscribed on the plate.