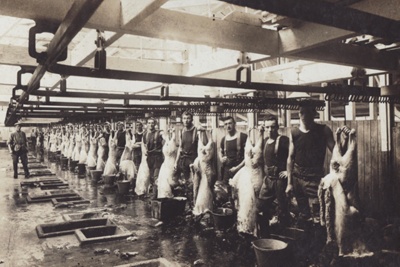 Undated black and white photograph of butchers at work in the slaughterhouse of the Mataura Freezing Works in 1925.

On the slaughter board, each solo butcher (who were sometimes called slaughtermen) had an overhead rail for his own use. The large holes in front of the men were fitted with chutes for the offal, fat, heads and skins which fell into small trucks before being further processed. Once dressed, carcasses were taken by a boy along the rail to be weighed, ticketed and taken to a cooling room before being frozen.

A piece of card is stapled to the reverse of the photograph recording a partial list of names. Handwritten on the card is:
'Right to left. J Hewlett, Sec McPhee/J Valentine, A Perry, T Kubala, A Turner/ C Clearwater, Board Walker/Jack Walker/YEAR and NAMES WANTED'

From the collection of the Mataura and Districts Historical Society Incorporated