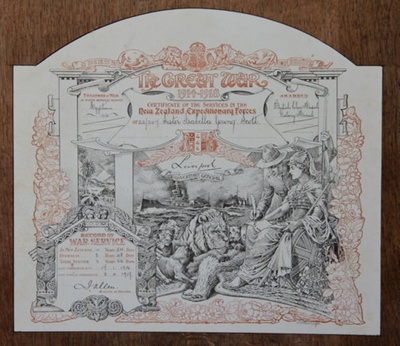 Certificate of Service awarded to Sister Isabella Young Scott for her service as a nurse during World War One.

Sister Scott was a Mataura identity. As the town's midwife from 1915 to her retirement in May 1947, she delivered over 1,500 local babies. Isabella was born into a Southland farming family in 1872. After her mother died she helped raise her siblings and later trained as nurse, completing her training in 1905 and 1906 at Guy's Hospital in London.

In 1912 she returned to Mataura as a private nurse. She then achieved her ambition, opening her own private hospital called Nithdale in Dover Street, Mataura. 1915 was a significant year, she delivered her first twins and volunteered for war service. She served in hospital ships and at the Walton-on-Thames Hospital in England, nursing New Zealand soldiers. She loved receiving copies of the Mataura Ensign in the post and shared news of home with local soldiers. Sister Scott’s care of our wounded servicemen, especially the ‘limbies’ (amputees) earned her real gratitude and mana.

Returning to New Zealand in 1919 she took back the reins of her Mataura hospital, devoting it to maternity care. She and Doctor Irene Woodhouse established a strong working partnership that lasted many years. Visiting fathers were pressed into service around the hospital. In 1933 Violet Ross (18), one of the above twins came to work for her mentor. In 1937 Sister Scott received the Coronation Medal for outstanding service to nursing.

As a community leader, she started Pearl of Mataura Rebekah Lodge in 1922 and was its first Noble Grand. She was also active in Red Cross and the Women’s Division of the Federated Farmers Union. After World War One, Sister Scott continued to work for servicemen. She held a position rare among women, serving as a vice president of the Mataura sub-branch of the Gore R.S.A from its inception until her retirement in 1947. The R.S.A greatly admired Sister Scott, and in 1937 awarded her its coveted Gold Star; she was the first woman in New Zealand to receive this national honour.

Sister Scott never married and died on 12 August 1951, after a life time's service to her community and country.

We have attached an article from the Mataura Ensign dated 20.05.1947 marking Sister Scott's retirement as well as her obituary to help convey Mataura's respect for this remarkable woman.

Headed 'The Great War 1914-1918 Certificate of the Services in the New Zealand Expeditionary Forces'.

From the collection of the Mataura and Districts Historical Society Incorportated.