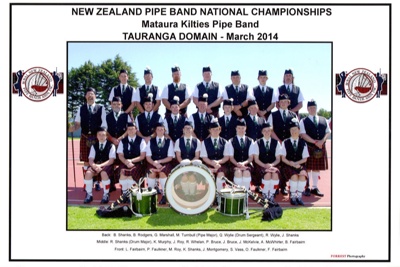 Photograph; a coloured photograph of the Mataura Kilties Pipe Band taken in 2014 at the New Zealand Pipe Band Championships in Tauranga.


In November 2014 the Mataura Pipe Band amalgamated with the Gore Pipe Band to form the Hokonui Celtic Pipe Band.
When announcing the merger, Band President Jeff Shanks said:
'with more than 200 years of history between the two bands it was not an easy decision but with both bands struggling for members, it was the right one, otherwise both bands could have faded out of existence. Our aim is to have a strong band in Eastern Southland to be still able to attend R.S.A. nights, Anzac Parades, Santa Parades and other community events in both the Mataura and Gore Communities because this is where we draw our members from'.

From the collection of the Mataura and Districts Historical Society Incorporated