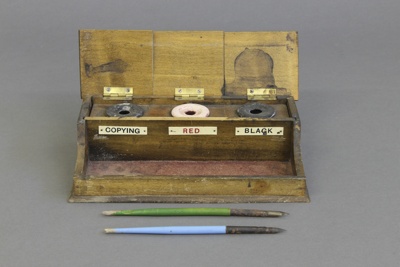 Inkstand; a three-ink compartmented and separately-lidded wooden inkstand. The compartments are labelled: copying, red, black and contains three inkwells; and there is a space in front for the pens. This particular inkstand was used by Ewen Duncan Cameron who started as secretary of the Mataura Dairy Factory in July 1921.

Ewen Cameron grew up in Mataura, his father, Hugh was the owner of Cameron's Hotel in Main Street. Ewen was a veteran of both the Boer War and World War One. He was known for his strength and fitness and was nick named Sandow, which was of the strongest line of papers produced at the Mataura Paper Mills. A long serving member of our Historical Society, Don Hesselin, recalls that Ewen gave weight lifting demonstrations during concerts in the old Mataura Town Hall. During one of these, he dropped the bar, putting holes in the stage floor! Ewen was also a good swimmer and demonstrated his prowess by diving of the Mataura Suspension Bridge. As a young man he worked in the family business, he also worked in the forestry industry, in the Chambers at the Mataura Freezing Works and as secretary of the Mataura Dairy Factory from 1921.