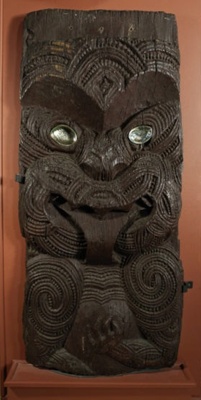 A large Maori carving, Poupou with carving styles of stone and metal tools. The Poupou is personifying Te Rauangaanga, a Chief of Ngati Mahuta.

The Poupou is made from carved Totara and Paua shells are used as the eyes. The carvings that are present have been completed with both stone and metal tools. He has also been painted brown, likely much later than he was originally carved.

The carving of Te Rauangaanga was made to personify the great chief of Ngati Mahuta and was used as a Poupou at Pekapekarau until he was found and later donated to the Te Awamutu Museum Collection.