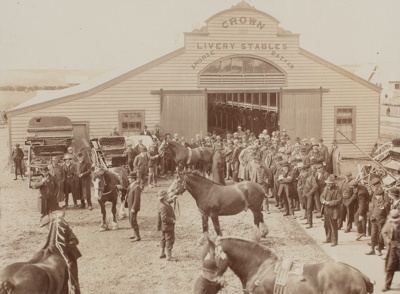 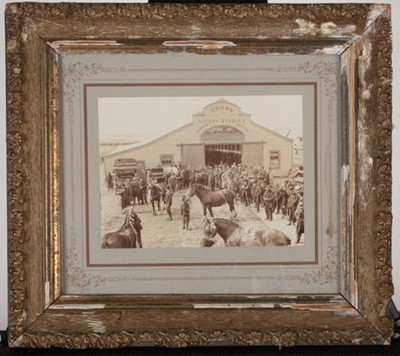 This is a photograph of Mick O'Brien's Horse bazaar which was located out the back of The Crown Hotel in Otautau. O'Brien owned the Crown at the time.

About the Building & the Bazaar:

R. Seatter built the Bazaar in 1900 for Sweetman's, who at that time owned the Crown Hotel. Messrs McKenzie & Wilson were the architects. The very first sale held here was at the Opening Day on Wednesday 5th September 1900. The attendance at this event was huge, with many settlers coming 'from far and near'. At the sale, Heddon Bush's Mr Forde's First Class gelding fetched the price of 49 pounds, a modern-day equivalent of over $8000.

Mick O'Brien purchased the Bazaar in 1907. The building narrowly missed being burned to the ground in a May 1919 fire which burnt the Hotel and other buildings alongside it.

By the end of 1920, the building had been taken over by the Wallace Motor & Tourist Co. Ltd., owned by Messrs JS Robbie and WGR Smith. The old bazaar was refitted and re-purposed as a garage. It is not clear where the still continuing and highly successful O'Brien's Horse Bazaar sales were held during the time the garage operated out of the old horse bazaar. It is possible that sales continued to be held on land owned by Mick O'Brien. Wherever the horse bazaar was held over the next number of years, it remained named O'Brien's Horse Bazaar and was most probably still operated elsewhere on the site, quite possibly out the front, in the area shown in the photo.

The very last horse sale on record held under this name, was on August 28th, 1928. This may be because by the end of 1928, Messrs Johnston and McKenzie had nearly completed building a new service station in front of the Crown Garage, for Bob Buchanan. Bob used the old Crown Garage to store his parts.