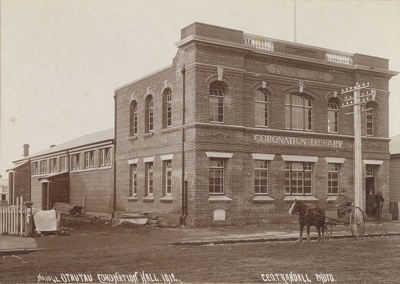 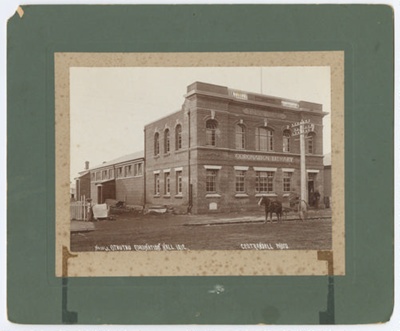 This is a photograph of the Otautau Coronation Hall taken in 1912, not long after its completion with the building material still visible lying outside to the left of the building. The Hall was officially opened in August 1912.

The Coronation Hall known as the second or new town hall was built on the site of the old Athanaeum. The government gave a grant to help with its construction in the hour of King George VI coronation and it thus became the Coronation Town Hall & Library in honour of this occasion.

Who Built the Coronation Hall?

What Happened to the Coronation Hall?

In 2011, the Hall was deemed an earthquake risk and no longer safe for public use. The New Life Church, eventually, purchased the building. The New Life Church demolished the building during April-June of 2017; they hop to rebuild a new structure on the site, that will double as a local civic centre and a larger church to service the township and their own needs. As of October 2018, no work has began.

Otautau Coronation Hall & Library
After a decision reached at a general meeting of the subscribers, presided over by Dr. AA Stewart, the Library was first opened for the issue of books on Saturday 2nd August, 1913. Miss Carrick was the first Librarian appointed.

Printed on bottom of the photo: 'No.1042 OTAUTAU CORONATION HALL 1912 GEO.T.RANDALL PHOTO'
Plans for a cabinet have been sketched on the back.