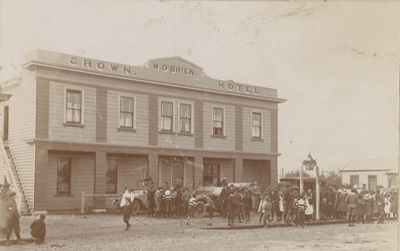 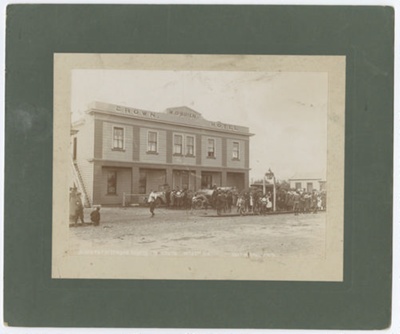 This is a photograph of the Otautau Crown Hotel with Canadian Cadets outside it. The photograph was taken on October 22, 1912 while the Cadets were on their tour of Southland.

About the Crown Hotel:

Mrs Price (wife of the original builder and owner of the first Otautau Hotel) built the Crown. The Crown was one of five different hotels that Mrs Price was involved in building or running.

After Price was bankrupted in 1884, the Sweetman's bought the Crown and ran it until 1907. At this point, Mick O'Brien bought it and operated it out of three different premises and sites over its many years, before it was turned into a local spraying contractors business headquarters and eventually demolished on November 26, 1987.

This first Crown Hotel stood on the site which is now occupied by PGG Wrightson's store on the corner of Alderly & Main St (2018).

The Canadian Cadets toured New Zealand in 1912. Their stop at The Crown, on the way to Winton, was a great affair with citizens massing to see not only the Cadets but also the motor cars they were travelling in.

The cadets were very popular in Southland, with the Canadian Trade Commissioner for Australia writing to JT Prain, secretary of the Southland branch of the Navy League, in which he acknowledged and thanked the Navy League for their warm welcome and kindness shown to the cadets on their recent tour of the New Zealand.

Handwritten on back of the mount: 'With complements from the Catlins Historical Society Owaka OTAUTAU 2010.77'
Printed on bottom of the photo: 'NO.1073 OF CANADIAN CADETS TO OTAUTAU OCT 22 1912 GEO.T. RANDALL PHOTO'