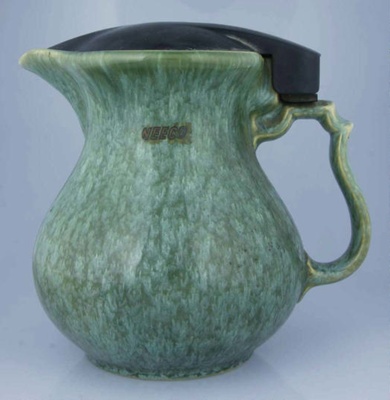 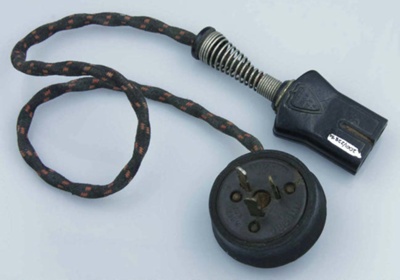 This mottled, green-glazed ceramic electric jug has a bulbous base, narrow neck, spouted rim, and handle. Directly above the handle is the two-prong connection for the electric cord, which is moulded in one piece with the black bakelite lid. On the centre of the lid and a small red sticker on one side of the neck is the brand name, ‘Neeco.’ A coil of fine wire wrapped around a ceramic insulator is suspended by two thicker wires inside the jug.

There is also a separate cloth-covered electric cord with a three-prong plug at one end and a two-point attachment marked ‘Neeco’ at the other, which plugs into the jug.

In 1924, the National Electric and Engineering Company, or Neeco, took over Dominion Porcelain and Tile Industries Ltd. of Temuka, which was renamed New Zealand Insulators Ltd. (NZI). In the 1930s, factory manager Arthur Roden Toplis expanded NZI’s production into pottery with the creation of the Temuka Pottery.

Temuka Pottery began producing electric jugs that same decade. Although Toplis created some designs himself, he also hired potter Thomas Norman Lovatt on contract to create one design, known as ‘Hot Point.’ It so impressed the company that he was appointed manager in 1941, Toplis having died in 1939. Some designs from the Toplis era stayed in production during Lovatt’s tenure, joined by new designs by Lovatt. Electric jug production continued until the 1950s.

Most of Temuka Pottery’s electric jugs came in a choice of a cream or coloured, often mottled glaze, making this an example of a typical jug. They were also created for a number of different electrical firms, each of which had their own design.

Lovatt retired in 1965 and the following year Neeco was taken over in 1966 by Cable Price Downer Ltd. Both NZI and Temuka Pottery still exist today under different ownership.