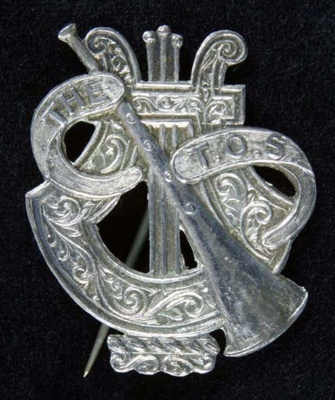 The body of this silver badge is formed by the logo of the Timaru Orchestral Society, for which it was made. It consists of an ornate lyre crossed diagonally by a horn and interwoven with a ribbon bearing the name, ‘The T.O.S.’ There is a pin with a hook clasp on the back.

Embossed on back: ‘Bock – Wellington’

The Timaru Orchestral Society gave this badge to clarinet player William Stanley Smart, who was born in New Zealand in 1900 to William and May Stewart Smart. His wife, Alma Dorothy Hurrell, whom he married in 1923, was one year his senior and the daughter of Gorge Olbert and Mary Jane Hurrell. Alma enjoyed photography and some of her photos of South Canterbury are held in the Museum’s collection. William died in 1931 and Alma in 1979.

During the latter half of the 1920s, William worked as branch service manager for the Colonial Motor Company, Timaru’s Ford dealership, but in 1930 was transferred to the Auckland dealership, W. Andrews & Son. At that time, the Honourable Secretary of the T.O.S., P. Watts Rule, presented Smart with a letter on behalf of the orchestra’s Committee thanking him for his involvement in the ensemble.

As the Timaru Orchestral Society, the ensemble existed from at least 1886 well into the 1930s, although it is possible that it grew out of the earlier Orchestral Society, founded around 1879. The group had this and other identical badges made in the Wellington shop of well-known medallist and silversmith William Rose Bock (1847-1932). In later years he shared his business with his son; it is unknown which of the two crafted the T.O.S. badges.