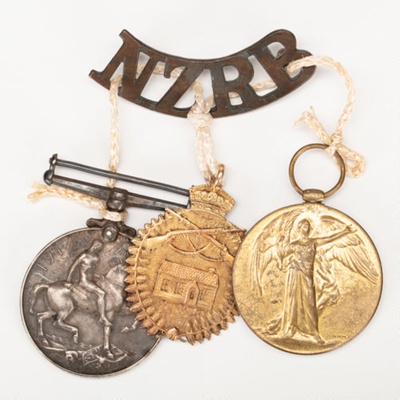 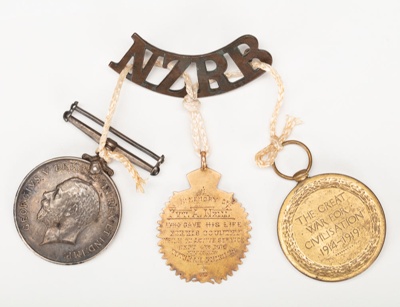 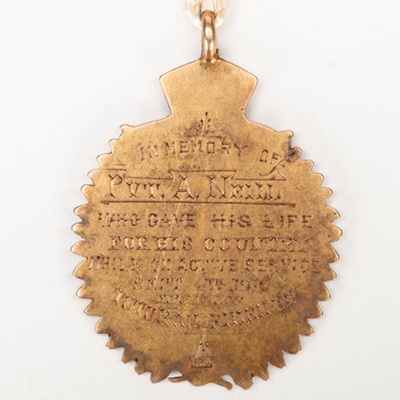 These medals were posthumously awarded to Private Albert Neill of Tuturau after he was killed in action on the Western Front on September 4, 1918. Albert served in the 2nd New Zealand Battalion in the 1st Company of the Canterbury Regiment.

The three medals are joined to a New Zealand Rifle Brigade shoulder badge by string. The medal on the left is the British War Medal and the medal on the right is the Victory Medal.

The medal in the centre is unique in that Albert’s friends had it specially made in memory of him. The front of the medal depicts a small hall with cross guns above it. At the top of the medal is a crown and the border of the medal is a set of silver ferns on either side.

The engraving on the back of the medal reads:

‘In memory of Pvt. A. Neill who gave his life for his country while in active service Sept 5 1918 from his Tuturau Friends’.

Albert though the first member of his family to die in 1918, he was not the only. By the end of 1918, the Influenza Epidemic was hitting New Zealand hard and Eastern Southland was no exception. A make shift hospital had been established at the Gore Race Course and one of the first patients to die at this hospital was Albert’s older brother James. James, known by his middle name Henry, died on November 22, 1918. Next to die was Henry’s wife, Helen, on December 1, 1918. The following day, Albert’s sister Margaret, died.

Henry and Margaret were Albert’s much older twin siblings. They were both 24 when Albert was born on January 10, 1890. Prior to his enlistment on July 17, 1917, Albert had worked on Henry’s farm at Tuturau which had once belonged to their parents Thomas and Annie.

The family all immigrated to New Zealand together from … in 18… Only … later, their middle sister Mary died in 1898. After the sudden death of so many members of the Neill family, it seems that only Albert’s friends and the younger members of his family were left to remember him.

These medals came into our collection via the Tokanui RSA, however, if anyone knows if there are descendants of the Tuturau Neill family or how these medals came to be in the Waikawa District we would love to hear from you.

For the two service medals.

Unknown where the medals from Albert's friends were made but probably locally in Southland.