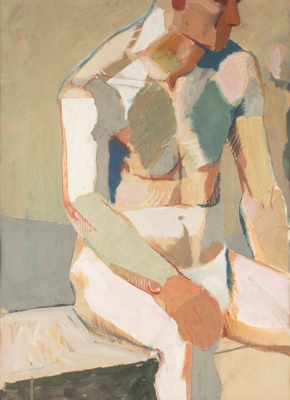 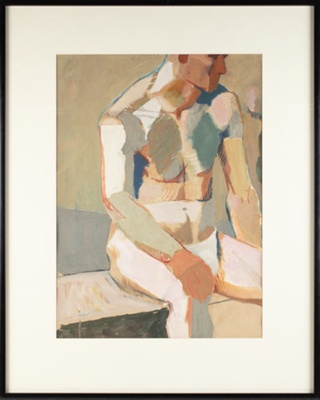 This artwork,'Seated Male Nude', is by the New Zealand artist Edward Bullmore. It was painted in England in 1966 when the artist was based in London.

Artist Biography:
Edward Bullmore (1933-1978) was born in Balfour in Southland and attended Christchurch Boys High where he was a top boxer and rugby player, representing Canterbury in 1956.
Bullmore completed his Diploma of Fine Arts at the University of Canterbury in 1955. Upon graduation he trained as a teacher at the Auckland Teachers’ College before taking up a job at Tauranga College in 1957.

In 1959 he and his wife Jacqueline, also an art teacher, moved to Florence, Italy, where Bullmore studied for a short time with Italian painter Pietro Annigoni. In 1960 they moved to London. Bullmore's London period produced some of his most memorable works, including a series depicting the Cuban Missile Crisis. The highlight of his career was being invited to take part in an exhibition in Exeter in 1967, exhibiting alongside top surrealists such as Salvador Dali. Film director Stanley Kubrick bought two of Bullmore's painting constructions, and one appeared in A Clockwork Orange.

In 1969 the family returned to New Zealand, Ted taking up a job at Rotorua Boys' High School. His Rotorua period was highly productive, but he suffered from a degenerative bone disorder and died in 1978.