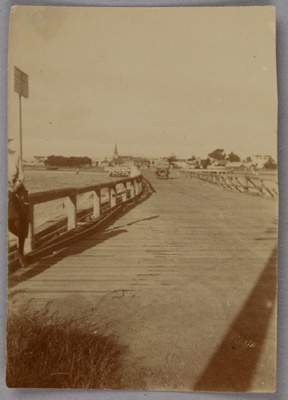 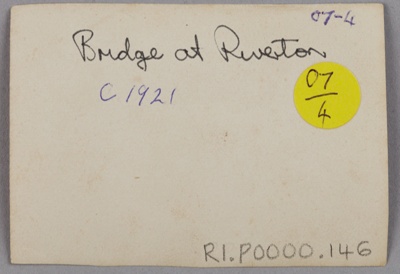 This photograph of the original bridge over the Aparima estuary was taken around 1921, when the bridge was almost 50 years old. By then discussions had been ongoing about replacing the aging timber structure. However, it wouldn't be until 1930 that the new ferrous cement bridge was opened. In the intervening years, the wooden bridge seen here received extensive repairs to keep it safe.

In 1873, some of the earliest editions of the Western Star, Riverton's local newspaper, recorded the frustrations of building the wooden bridge. The enterprise was a challenging affair, as anyone who has seen the tidal flow through the estuary could well imagine. Additional setbacks arose from timber and labour shortages, and in November of 1873 the contractors were fired for having not completed the work. The following month fresh tenders were invited for the completion of the work, and in January 1874 Messrs Dawson and Co were announced as the new contractors, they would receive 4,400 pounds for their trouble.

Work re-started but things did not go much more smoothly. Vandals cut away some of the staging around the site, with the timber then clogging the estuary and floating away. Later, a punt and pile machine were overturned and ruined. By late April Mr Dawson was advertising in the paper for 'anyone who can deliver' the timber required for the beams. Finally, in early June 1874, the final pile was driven into place, followed by celebratory gunshots and the hoisting of a red flag.

The work finally nearing completion, the Western Star ran an article on 11 July 1874, which reported on progress in glowing terms:

'The Aparima bridge being a work of considerable importance not only to the immediate district, but to the province at large, we have collected a few particulars respecting it that will be perused with interest, especially by our readers in more distant localities. Mr. Dawson, the contractor, has very courteously showed us over both jetty and bridge, for the information of matters of detail, furnished below me are mainly indebted to that gentleman.

The bridge when completed will be 782 feet long, by 19 ft wide, it has 23 spans of 34 ft each, 7 piles in each pier with the necessary ties and braces, which part of the structure is nearly completed. The upper work is also in an advanced state, seven of the spans have the longitudinal beams over them, five beams to each span of 14 x 12 inch timbers, which are strongly understrutted by 12 x 9 inch timbers, five bays or spans are planked, and the hand-railing built.

The contractor is about to commence the upper work at the other end of the bridge, which will materially facilitate the progress of the same with the increased number of workmen now employed. The whole of the timber has been obtained within a few miles of Riverton, and is composed of black pine and totara of the very best quality, and is now being delivered in sufficient quantities, and in a satisfactory manner. There are 30 men now employed on the works, the majority being carpenters.

The jetty is 100 ft long, by 21 ft 6 in wide, abutting on to the bridge at the 7th and 8th pier, an angle of 65°. The piles of which are nearly all driven. We learn that the contractor hopes to have both works completed within three months from date.'

Despite Dawson's optimism, the project dragged, plagued by a string of errors, chief amongst them, probably, being a lack of work on the approaches to the bridge. This meant the bridge was initially the domain of pedestrians, who would easily cross the uneven surfaces at either end.