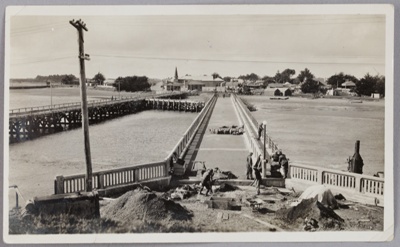 This postcard, almost, shows all three bridges in Riverton's history. On the far left is the embankment leading to the railway bridge. Next is the old, original timber bridge and at centre is the new cement bridge - this photograph was taken in 1930 during the final stages of construction.

Riverton Aparima's new bridge was first proposed around 1919. After much discussion, and delays, repairs were carried out to the old timber bridge to keep it serviceable, until a replacement could finally be built. Work did eventually start on the new bridge, which was constructed of reinforced ferrous cement and (at the time of writing) this bridge is still in use today.

The official opening of the bridge was in December of 1930 and we presume this photograph was taken not long before then.

S.L. McNeil was a photographer, active during the years 1910 - 1940 (approx). Stewart Leslie McNeil was a business man and talented photographer who lived, and worked, in Riverton. He managed Wesney's Emporium, which had branches in Riverton and Otautau. We know that he began taking pictures sometime during his employment with Mr Wesney, as his photographs are mentioned in several newspaper articles of the time. The earliest mention is 1921, but we estimate his practice began some time earlier. He later traded under his own name, taking over J Forsyth's store (next to Wesney's), which offered a bit of just about everything, photography included. He photographed and produced many postcard views of Riverton, which he sold from his shop. Many group photos from this era also bear his signature.