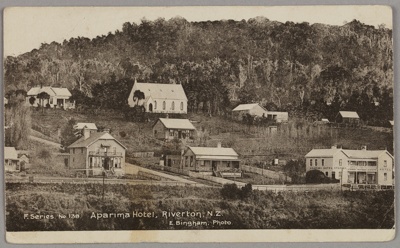 A photographic postcard showing a view of South Riverton, with the intersection of Milton St at bottom centre. The Aparima Hotel is at right, and towards the top, just left of centre is the catholic church. We know this image predates 1906, as the photographer was living elsewhere after that date.

The photograph was taken by Ernest Bingham, a keen photographer who was a Constable in Riverton until he transferred elsewhere in 1906.

Ernest's obituary appeared in the Southern Cross newspaper, 10 June 1916:
Police-Sergeant Ernest Bingham, formerly stationed at Riverton, Geraldine, and Invercargill, died suddenly at Clyde on Wednesday. He was a native of Tasmania, where he was born 48 years ago, and in his youth was a noted axeman, gaining championship honours. He was a most capable officer, popular alike with his comrades and the law-abiding section of the public. His hobbies included photography and photo-engraving. He is survived by Mrs Bingham and a son.

The postcard was produced by John Forsyth, who sold many Riverton views in his store, including photographs taken by his son. John's earliest business in Riverton was in fancy goods and the hairdressing profession. Later he erected substantial shops along Palmerston Street which were destroyed by fire just months before his death in 1938. Advertisements appearing in the Western Star in 1907 record some of the goods sold by John on Palmerston Street, including 'Toys for little ones, photo frames, musical instruments, clocks, watches, jewellery, etc.'

Printed on the front: 'F.Series No. 138, Aparima Hotel, Riverton, N.Z., E.Bingham Photo'.
On the reverse along the left edge: 'Issued by Jno. Forsyth, Bookseller and Stationer, Riverton, N.Z.'
On the reverse are the other usual postcard markings including 'Printed in England'.
Stamped on reverse: 'Wallace Early Settlers Assn Inc Riverton'.