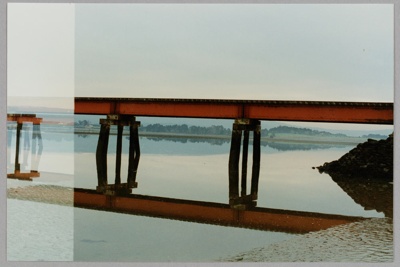 This detail of the railway bridge has been taken on film, which has not been advanced properly in the camera, resulting in the ghosting on the left. While not the most stunning image of the railway bridge, it is useful in that it offers construction details that are visible via this low viewpoint.

Prior to the construction of a dedicated railway bridge, the trains shared bridge space with horses and pedestrians at Riverton. As train traffic increased, it was decided to build a dedicated bridge to keep the trains and road traffic separate.

Excavations for the new bridge began in 1903 and it was opened in 1904. Including the causeway it was Southland's longest railway bridge spanning 750 meters across the estuary. The bridge was frequently used by both passenger and freight trains until the 1970s. The railway goods shed was demolished by the Railway department in 1973 and was not replaced which signalled the end of the Riverton line; in 1976 the Riverton to Tuatapere line was closed and the last train to Riverton ran on 20 December 1977.

By the end of January 1978 the line was officially closed. After this closure the bridge was no longer maintained and by the 1990s tidal currents and wave action had eroded the central causeway making the bridge a potential hazard to public safety. In 1994 the Southland District Council submitted a request to either upgrade or remove the bridge. As a result the Department of Survey and Land Information - who managed the property on behalf of the Crown, lodged an application with the Southland Regional Council for a resource consent to remove the bridge.

The demolition of the bridge in 2001 caused some controversy as many thought it could have been made into a walkway or cycleway.

On the back is the printing code from when the film was processed and the paper is stamped with the Kodak logo.