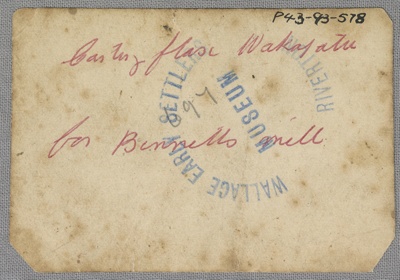 A black and white photograph of a horse cart full of flax destined for Bennett's flax mill. Bennett's was established by brothers, Richard and William, in 1907, after the original Bennett Brothers of Richard, Bill, Jack, Tom and Alfred, partnership was dissolved.

From 1900 to 1905 the company was located at Waihoaka, then in 1905, shifted to Waimatuku, until 1907. Twelve years later it was destroyed by fire, but soon rebuilt. Richards son, George, took over the running of the mill from his father in 1939, due to Richard becoming ill. Production continued through World War Two, until dwindling supplies forced the mill to close in 1945, after more than forty years of production.
Information sourced from Margaret Trotters 'Flax Mills of the South'. A copy is available to view at Te Hikoi Museum in Riverton.