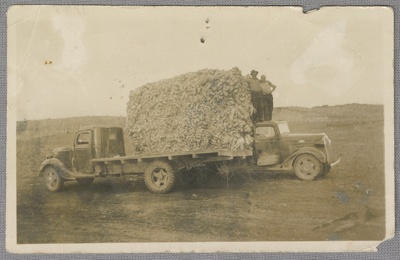 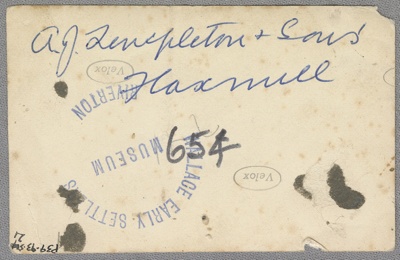 This photo shows dried shanks of flax fibre piled high on a truck, possibly stacked by the two men who pose happily for the camera. This photo was taken near the end of the flax's journey through the Templeton's Flaxmill. The fresh harakeke (flax) was harvested by skilled cutters who knew which leaves and how many to cut from each plant. The raw flax was then conveyed to the factory and fed through the scutcher, a terrifying machine which thrashed the green matter in order to separate it from the tough, fibrous heart of the leaves. The scutched flax was draped and washed thoroughly, before being taken back outside and hung over wires, where it would spend up to six weeks drying.

William and Jessie Templeton were the earliest flaxmillers in the family, at the original location at Otaitai Bush. Their son William later moved the mill to its current site nearer Riverton, before it was later taken over by his children.

William's four eldest sons went to fight in World War One, while the remaining family ran the mill to produce the rope and twine needed for the war effort. Prices had boomed during the war, but slumped in the 1920s. William retired in the 1920s and his son, Andrew, took over the management of the mill. In spite of the Depression he kept running, and made it pay, although he also diversified his property to carry cattle and sheep.