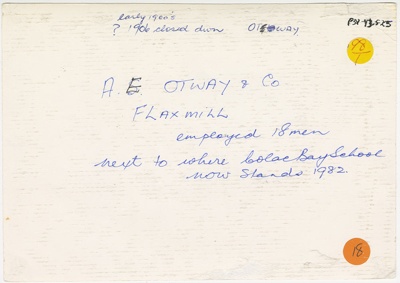 A black and white photograph of Otway's Flax Mill at Colac Bay. This is the same image as RI.P32.93.430, and that image had the names of some of those pictured.

The firm A. S. Otway & Co operated several flax mills, and set up at Colac Bay on a site on Foreshore Road, near the school and Kaik, about 1902. They used the Ōraka stream for their water supply. Some of the fibre for the Colac mill was bought up from a mill at Waiau to be scutched. The mill employed fifteen people, plus carters and six flax cutters. The mill closed in 1905 and was put up for auction in 1906. A full account can be found in the book Colac Bay by Joan Macintosh.

Eight of the men are named in RI.P32.93.430; The first five on the left are not named. The sixth man in from the left is Andrew Henry, son of Francis Henry a Colac sawmill owner. His wife was Helen Rodgers and they had a large family. He left the district in 1907, evidently a popular person as he was given a valuable gift at the family's send off. They moved to the Catlins to manage sawmills there, he died in 1944 in Invercargill.

Continuing from left to right. Mr Stewart Campbell was the manager he was well qualified for this position having previously been an engineer. He had first class certificates for stationary engines and locomotives. Before coming to Colac Bay he worked as an engine driver in Gore. He left the mill in 1904

Pretchnell- no information. Name may be misspelt.

Peter Godfrey Craig was a saw mill labourer, his wife, Sarah Brazier, was from Riverton.

Paddy Keady lived in Colac Bay was a labourer.

Felix Dewary no records; name may be misspelt.

John Henry Dawson (Jack) was the son of George Tasman Dawson a sawmill manager at Colac Bay. Jack married Ellen Elliot at Colac Bay and remained in the area all his life.

The remaining names are Miller or Shannon, we do not have any information on them.