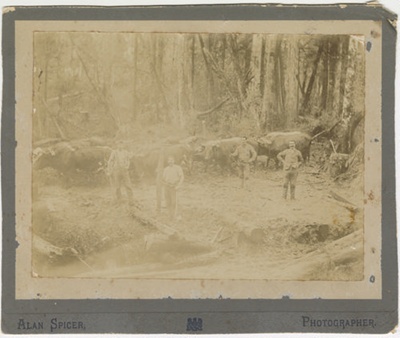 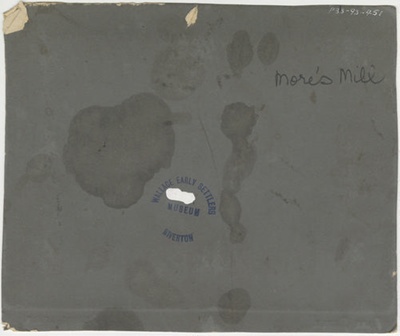 A black and white photograph of a Bullock team and four men of James More and Sons Saw millers.

James More and Sons were saw millers in Riverton. James More Snr established the business and took over one of the early sawmills in Riverton. They first had a mill near the present recreation ground, before taking it over the river and milling a block there. Later sawmills of the firm were situated on the Pourakino river. The mills lay six or seven miles back from the river with which they were connected by an iron tramway. The timber was conveyed by a locomotive to the river where they were transported to Riverton in punts towed by a steam launch. Before establishing the sawmilling firm, James More Snr had a varied career working previously as an engineer, a miner, and a station owner before taking up saw milling.

James More Jnr was born in Riverton in 1874 and entered the sawmilling business with his father and brothers, Thomas and later Albert. James became a partner of James More and Sons in 1899 and was the bush manager at the mills. Mores continued to have a large impact on the community well into the 20th century. An article from the Southland Daily News, October 25, 1952 states: 'Indeed it was said at one time, with some truth, that the Mores owned half of Riverton'

Jimmy Jones imported the first cattle to New Zealand in the 1830s to provide fresh beef for his two Bluff shore whaling stations.

Cattle proved essential for the sawmilling industry in Southland. Bullocks (castrated bulls) provided essential heavily haulage for early timber and log extraction. Lumbering teams, comprised of many bullocks, were directed by a bullock driver to pull the heavy native logs from the bush through deep mud to the tram head, mill or wharf.