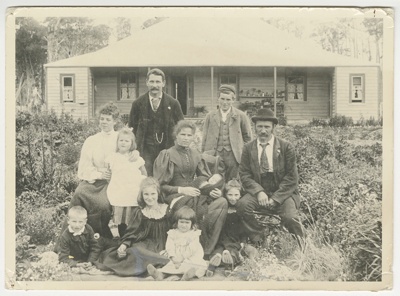 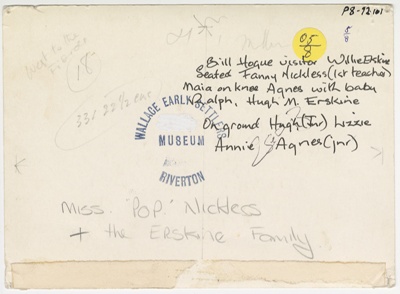 Hugh Erskine was originally from County Down, Northern Ireland. He arrived in New Zealand in 1880 and took up work in pest control. His rabbiting earnings were enough to send for Agnes Armstrong to join him. She arrived in June 1883, along with Hugh's brothers Thomas and John, and a week later on 2 July 1883, Agnes married Hugh.

In September 1884, William John was born and five months later Hugh took his young wife and son to settle west of the Waiau river. In 1885 they became the founding pakeha family at Papatotara. Using timber from Colac Bay they built 'Westwood' as their permanent home. It was completed on 28 February 1895 and still stands today.

With the new house and by now five children, the couple employed a governess, Miss Fanny Nickless, who stayed for a year, left, and then returned to teach the children from 1898 to 1900. Fanny is pictured wearing the white blouse with Maia on her knee. Bill Hogue, a visitor stands at the back along with William 'Willie'. Pictured on the far right, seated, is Hugh McKee Erskine, Agnes (Jnr) on ground, mother Agnes with baby Ralph. In front right to left is Annie, Lizzie and Hugh (Jnr).

This photograph appears in page 16 of the booklet 'Erskines from County Down' which was published in December 1984. This booklet is able to be viewed by appointment in our Research Room here at Te Hikoi.