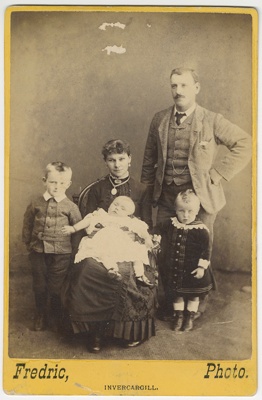 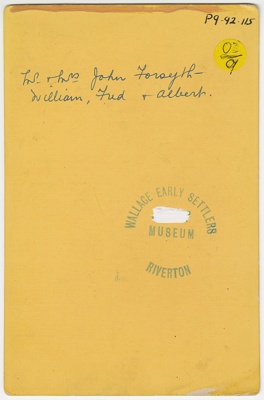 A black and white photograph of Martha Sophia Forsyth (neé Smith) with her husband John Forsyth and three of their children, William, Frederick 'Fred' and Albert. John and Martha married on 24 April 1882.

Upon arriving in Riverton from Innerleithen, Scotland, John entered business in the fancy goods and hairdressing profession. Later he erected substantial shops along Palmerston Street which were destroyed by fire just months before his death in 1938. Advertisements appearing in the Western Star in 1907 record some of the goods sold by John on Palmerston Street, including 'Toys for little ones, photo frames, musical instruments, clocks, watches, jewellery, etc.' The Forsyth store included provision for photographic processes and at times space was leased to professional photographers, such as P C Hazledine. Albert Jubilee Forsyth, seen here as a young boy, became a keen photographer in his own right and produced many fine views of the Riverton area which were sold in his father's shop, as postcards or as glass-fronted souvenirs.

John was a member of the Riverton Volunteers and was a keen angler, amongst the first in Southland to be issued a fishing license. John died on 8 November 1938 aged 82 and is buried in the Riverton cemetery.

Fred Forsyth died 9 February 1907, aged 21, when he drowned at Heddon Bush. Albert died aged 31 from influenza on 13 November 1918. Another son, Norman, served in World War One and was killed in action at Messines. Most of the family are buried in the Riverton Cemetery.