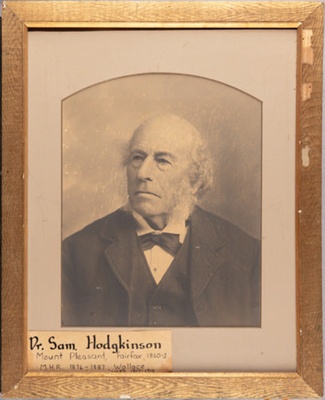 A framed black and white photograph of Doctor Samuel Hodgkinson, Sam (1817–1914) who was the Member of the House of Representatives, for Wallace from 1876-1879 and from 1887 to 1890. He has an entry in Ngā Tāngata Taumata Rau: the Dictionary of New Zealand Biography, which is available online via Te Ara: The Encyclopedia of New Zealand. There is also a biographical entry about Doctor Hodgkinson on pages 80-84 of the Riverton Heritage Society's publication 'Records of Early Riverton and District'.

Several pages of a book have been taped to the reverse of the frame. On the left is a caricature of Doctor Hodgkinson, and the following text: Dr. Hodgkinson. Samuel Hodgkinson, M.H.R. for Wallace electorate, was ushered into this world of much to be desired reforms in the year 1817, in North Nottinghamshire, England. At the age of nine he was sent to the Collegiate Grammar School, Southwell, and eleven years afterwards entered at University College, London, as a medical student, there obtaining honorary certificates in the anatomy, surgery and botany classes. In 1840 Samuel became a full-blown member of the Royal College of Surgeons. Two years lager he was found visiting Nelson and Wellington, New Zealand, as Surgeon Superintendent of the New Zealand Company's emigrant ship "Bombay". Returning to England, he practiced there or several years, and eventually emigrated to Port Philip, Australia, in 1847. Four years afterwards Samuel returned to his old love, New Zealand, this time selecting Canterbury as his resting place. There he took up the Dean's Peaks and Doctor's Hill Station, North Canterbury. In 1854 the Doctor visited England once more, and there took an active part in assisting to promote emigration to New Zealand, publishing to that end a pamphlet, entitled "Zealandia", on the Canterbury Province. He retuned to the Colony in 1857, and remained in Auckland for three years, when he removed to Southland and engaged in agricultural and pastoral pursuits. In 1864 he became a member of the Provincial Council of Southland, and in 1865 a member of the Executive Council of that body. In 1868 the Doctor rushed once more into print and gave to the Southern Hemisphere his pamphlet "Provincialism versus Centralism". In 1869 he introduced into the Provincial Council a new Executive Council ordinance providing for an elected Executive. Four years later Samuel was taken bad again, and published a paper entitled "A Council of State versus Government by Party". In 1876 he was elected M.H.R. for Riverton, and sat for that constituency for four sessions, during which he opposed the abolition of the provinces, and assisted in placing the Grey Ministry in office. At the General Elections of 1887 he was returned for Wallace. Samuel is a pronounced opponent of Centralism, is a moderate free-trader, and believes in liberal land laws. He is strongly opposed to the present system of Responsible Government, or Government by Party, and desires to see an elective Ministry. Unfailing of courtesy, and thoroughly consistent, the Doctor is listened to with attention and respect, though another generation has risen in the House, which knows not Samuel or the soundness of his old time politics.