Framed certificate, of appreciation from the residents of Tihaka and Hekeia to M... 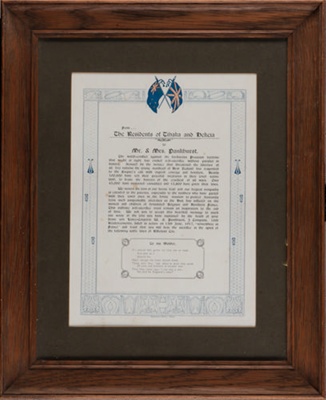 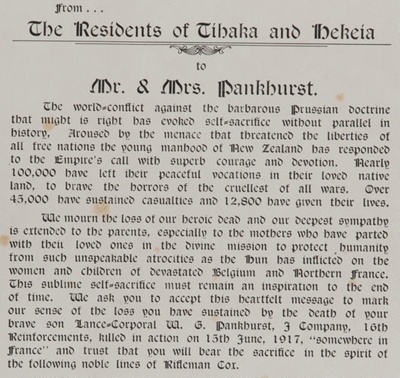 Framed certificate, of appreciation from the residents of Tihaka and Hekeia to Mr and Mrs Pankhurst

Certificate of formal appreciation from the residents of Tihaka and Hekeia to Mr Howell Pankhurst and Mrs Margaret Pankhurst. The Certificate pays tribute to their son, William Gordon Pankhurst Pankhurst, who was killed in action in Belgium during World War One.

William was a farmer prior to enlisting in May 1916. He was promoted to Lance Corporal but relinquished this rank in December 1916. He was wounded on 15 June 1917 and died the following day, aged 32. He is buried at Strand Military Cemetery, Comines-Warneton, Hainaut, Belgium and is also memorialised on his parents' headstone in Riverton cemetery.

William’s brother, James Alexander Pankhurst took a quite different approach to war service as a conscientious objector. He was a Christadelphian and opposed war service on religious grounds. He was transported to Trentham Camp via Dunedin to face a Court Martial. On 27 April 1918 he was found guilty of disobeying a lawful command, and sentenced to two years imprisonment with hard labour. James was held at Paparua Men’s Prison and released on 30 August 1919.

Framed certificate, of appreciation from the residents of Tihaka and Hekeia to M...