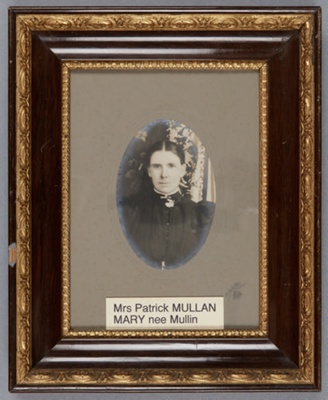 A black and white portrait of Mary Ann Mullan (née Mullin) who was born in Ireland in 1848. She was married to Patrick Mullan, a miner from the Orepuki area. We have a matching framed photograph of Patrick in the collection, ref RI.FW2021.034.

Patrick died in 1923 aged 87 and his obituary noted that he was an old identity of Orepuki and a miner for a number of years. Mary died in Invercargill in 1940 age 92 years, they are both buried at the Eastern Cemetery in Invercargill.

Mullan Road at Orepuki is named after this family.