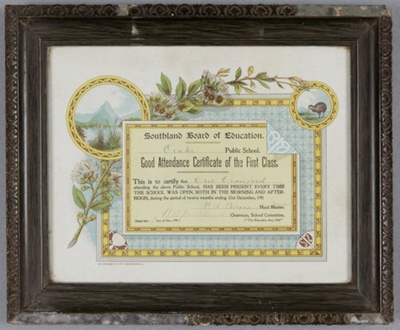 Eric Crawford was awarded this certificate in 1909 for 'Good Attendance of the First Class' at Oraki School. Eric didn't miss school at all during the year, hence this fine certificate.

William Eric Crawford was born 10 January 1900, the only son of Irish-born David Crawford and Florence May Gilson, who was born in Riverton to English parents. Eric went on to marry Christina Saunders in 1920, and they had a family of 6. Eric died in 1980, having been widowed years earlier when Christina died in 1935.

Oraki School, often referred to as the 'other' Colac Bay School, opened in 1886 to help service the increasing population caused by the sawmilling and railway expansion in the area and reduce pressure on the Colac Bay Native School, as it was called then. The school finally closed at the end of 1938 and the remaining pupils bused to Riverton District High School.