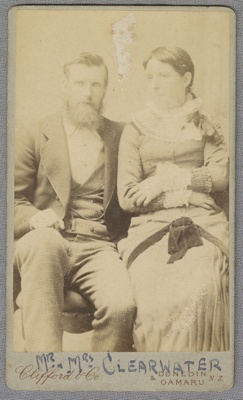 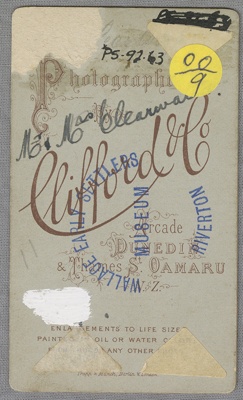 A black and white photograph of Mr. and Mrs. Clearwater. The photograph does not record the couple's first names but it is likely that they are Garrett Clearwater and Catherine Alice Clearwater (nee Harrington) who married in Riverton on 19 December 1884.

Garrett grew up in Dunedin before moving to Southland where he worked as a saw miller for thirty years. He died in Otautau after a long illness on 6th February 1920. Edith Mary Clearwater, their only child was born on 23rd March 1887. Garrett's death notice appeared in the Western Star on 10 February 1920 and Catherine's obituary on 14 November 1922.

Handwritten in ink is their names 'Mr n Mrs Clearwater' over the photographers name and names also repeated on the back. The reverse has a full cover advertisement for Clifford & Co. Along with a white blot, bottom left hand side, there is two small triangle stickers/outline across the bottom and one on the top right hand side. A circular stamp for Wallace Early Settlers Museum Riverton is in the middle. A black ink P5.92.63 and a yellow sticker with 00/9.