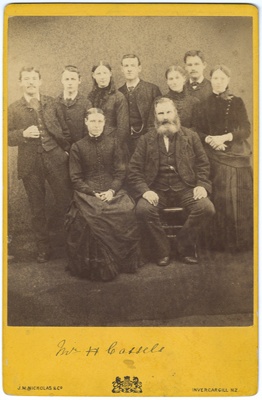 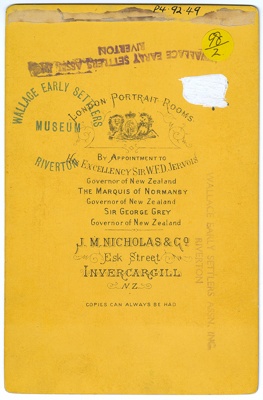 A small carte de visite (visiting or calling card) of the Cassels family; Henry and Marjory with seven of their children.

Henry Boston Cassels was born in 1837 at Carluke, Lanarkshire, Scotland, and Marjory Henrietta Bremner was born about 1845 at Rhynie & Essie, Aberdeenshire, Scotland.

Henry was educated at the Glasgow Academy. In about 1854 he sailed to Australia, where he spent five years working as a storekeeper in Melbourne. In 1859 he travelled to New Zealand and headed to the Otago goldfields, at Gabriel’s Gully, where he kept a shop with several others, one of whom was his older brother George Osborne Cassels who had also emigrated to New Zealand.

Henry and Marjory's first four children were born in the 1860s, Emily in 1863, Christina in 1866 and Henry Osborne in 1868. We aren’t exactly sure when they moved south but they were in Southland by 1869 as their fourth child Arnold was born in Riverton that year. Sadly he died before his first birthday.

During their early years in Riverton, Henry worked as a contractor tackling a wide range of jobs, such as timber carting and tree planting. A fine hawthorn hedge around Captain Howell’s property was his handiwork.
In the early 1880s Henry got involved with the newly formed Hospital’s Board of Trustees, acting as secretary. By 1884 he had premises on Palmerston Street where he sold goods, traded agricultural goods on commission, and acted as an employment agent for those seeking manual work.

In 1877 son Frank was born, followed several years later by Boston. The family was now Henry and Marjory with their three girls and four boys. Henry kept busy and in addition to his other exploits, he worked as a bailiff for the court and was well respected in this role. An extension into the timber and sawmill business did not go as smoothly, and Henry found himself in court, which was reported on at length by the Western Star. Henry was actively interested in politics and his name pops up in many reports of meetings during the 1870s and 1880s.

J. M. Nicholas had a number of photographic endeavours around southern New Zealand. The period when he traded solo as ‘J. M. Nicholas’, like we see on the reverse of this photo, was relatively brief (1884-1887). His studio was on Esk Street next to the Southland Times office, and it opened towards the end of 1884. Emily is in this photo, and she died on on 11 January 1885. We have therefore dated this photo to late 1884 as that falls in the middle of the several months when this photo could have been taken.

The carte de visite was usually made of an albumen print, which was a thin paper photograph mounted on a thicker card, and would have been 'traded' or given to friends and family during the Victorian period. Albums for storing and displaying these cards were also popular. The carte de visite was displaced by the larger cabinet card in the 1880s.

James Martyn Nicholas worked as a photographer for many years, with his brother Richard John Nicholas and for a time with William Dougall. This photograph is marked 'J. M. Nicholas' placing it between 1884 and 1887 when James Nicholas was trading by himself from a studio next to the Southland Times office, on Esk Street in Invercargill.

Kia ora for your great write-up about HB Cassels and family... Henry and Margery's first child was also the first child ever registered as being born at Ōtautau! A fun fact I found while doing my early history book research. She was born while Henry was the first Postmaster at The Ōtautau (long before the township was there) from 1 May 1863, her name was Emily Galetti and in fact she was born on the very day he officially started his job - she sadly died aged 21 in 1885 and is buried at the Aparima Riverton Cemetery. What a wonderful photo, as it is in the Public Domain, I will use it in the book and credit it to you.