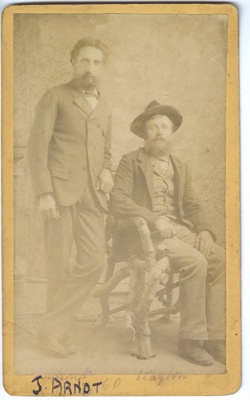 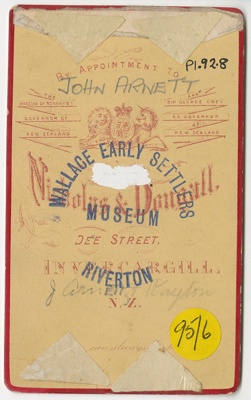 A black and white mounted carte de visite studio portrait of John Arnett standing to the left of a seated I. Taylor. Entries in the Western Star newspaper record that John Arnett was a farmer and miner who resided at Waiau and Eastern Bush in the 1870s. As yet we haven't been able to identify Mr Taylor's full name, occupation, residence or relationship to John.

The carte de visite was usually made of an albumen print, which was a thin paper photograph mounted on a thicker card, and would have been 'traded' or given to friends and family during the Victorian period. Albums for storing and displaying these cards were also popular. The carte de visite was displaced by the larger cabinet card in the 1880s.

Nicholas and Dougall's studio was in Dee Street, Invercargill. Photographs by Nicholas & Dougall date from around 1881-1884. Richard Nicholas was trading from the London Portrait Rooms until 1881. We believe his brother James took over the same year, in partnership with William Dougall. They made visists to Riverton which they advertised in the Western Star. In July of 1884 they advertised their partnership dissolved by mutual agreement. There had been a serious studio fire and it was during the rebuild process that they parted ways.