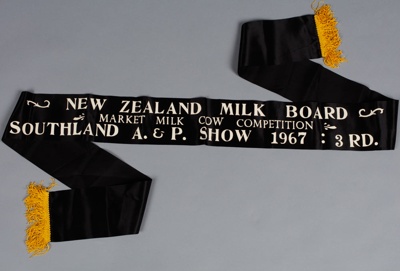 Leo and his wife Hilda (neé Somerville) were dairy farmers and had a very successful Ayrshire stud (started by his father) and they exhibited in the local A&P shows. Ivanhoe Phar lap was a frequent champion bull. They won many awards, including this 3rd prize ribbon in 1967 for the New Zealand Milk Board 'Market Milk Cow Competition'.