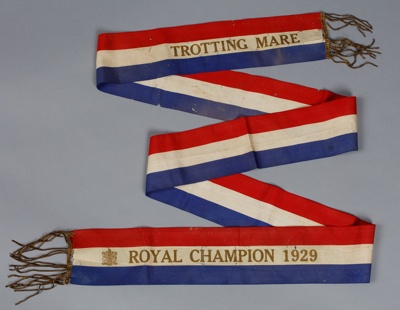 Leo and his wife Hilda (neé Somerville) were dairy farmers and had a very successful Ayrshire stud (started by his father) and they exhibited in the local A&P shows. Ivanhoe Phar lap was a frequent champion bull. The Muirhead family won many livestock awards, including this Royal Champion Trotting Mare prize ribbon in 1929.

'Royal Champion 1929' at left end, Royal Coat of Arms of the United Kingdom to left of this text.
'Trotting Mare' at right end.