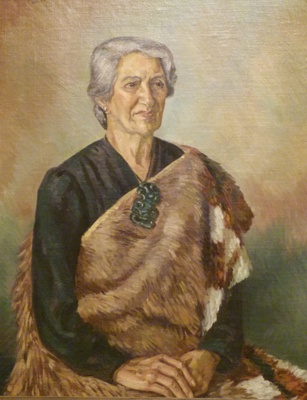 Maria Pomare, wife of Sir Maui Pomare, Rongowhakaata and Te Aitanga-a-Mahaki. Community leader, was the first Māori to be a doctor.

Beverley Shore Bennett, portrait painter born in Wellington in 1928, began as a student of Betty Rhind, later continuing at Wellington Art School. In 1948, she joined the New Zealand Academy of Fine Arts, exhibiting there until 1967. Shore Bennett also went on to design stained glass, her first window was at the Holm memorial, designed and installed in 1969.

Mīria Pōmare was the daughter of James Woodbine Johnson of Maraetaha, a wealthy runholder and orchardist, and Mere Hape of Rongowhakaata and Te Aitanga-ā-Māhaki. Pōmare’s parents gave her a bi-cultural education. Her mother ensured that she learnt Māori and retained contact with her tribal kin. Her father, a Cambridge graduate, ensured she had a good Pākehā education through a governess followed by study at Gisborne District High School. She developed into a forceful personality.

In January 1903 Mīria married Māui Wiremu Piti Naera Pōmare ( Ngāti Mutunga & Ngāti Toa), a medical officer, Māori health reformer and politician. Mīria assisted Māui Pōmare by playing an active role in community organisations and from 1911, working hard to further her husband’s political career. Her independent income meant that the couple could afford to build a gracious home, Hiwiroa, on 7 acres of land at Lower Hutt, with a tennis court and elaborate gardens, where they entertained in style. As Mīria’s inheritance was sufficient to meet their household needs, Māui could devote his parliamentary income to supporting his political ambitions and to fulfil his constituents expectations of hospitality and gift-giving. Māui and Mīria Pōmare had two sons and a daughter.

During the First World War Mīria Pōmare threw herself into patriotic war work, and, with Lady Liverpool, formed the Māori Soldiers’ Fund, which raised funds for the preparation of food parcels, which were sent to Māori soldiers and Rarotongans in France and Egypt. In 1917 the committee packed 100 parcels containing food, (including mutton birds) and knitted items. Her committee also organised street stalls to raise funds for the Red Cross and Red Jersey appeals.

When Māui Pōmare died in June 1930, Mīria Pōmare remained active in welfare and community organisations until her death at Lower Hutt in 1971.