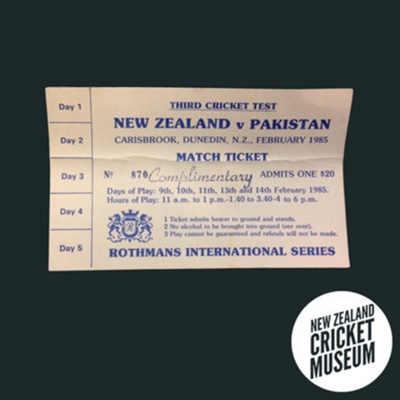 Unused ticket from the February 1985 Test between New Zealand and Pakistan played at Carisbrook. The Test was part of the Rothmans Internation Series.

The ticket is stamped with the number "870" and the text "Complimentary". The reverse side of the ticket contains the Terms & Conditions.

New Zealand won the Test by two wickets, largely due to a 50-run 8th wicket partnership between Jeremy Coney (111*) and Ewen Chatfield (21*). Their partnership came after Lance Cairns was forced to retire hurt after being hit with a bouncer that saw him hospitalised.