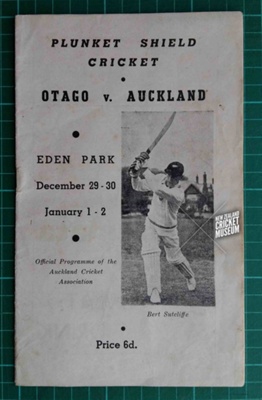 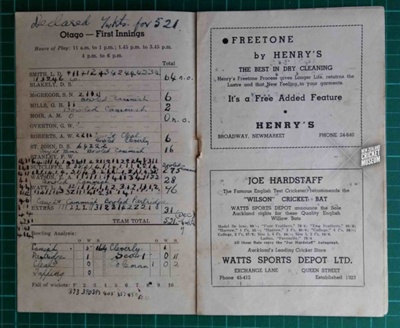 From 1949 to 1952, Bert Sutcliffe was in peak form for Otago, often at the expense of his home town of Auckland.

In the 1949-50 season, Bert hit the Auckland attack to all corners of Carisbrook to reach 355, a New Zealand record at the time.

In the return match of the 1950-51 season, which this programme is from, Bert once again took to the Auckland bowlers, hitting 275. He shared in a record opening stand with Les Watt as the pair put on 373. The partnership was dominated by Bert, Les made 96. This programme features a scorecard, faithfully filled in by a fan who had a lot of trouble finding space for Bert's runs.

In the 1952-53 season Bert would better his New Zealand record in hitting 385. Luckily for Auckland they were spared this time as Canterbury bore the brunt of the classy lefthander's run-scoring.

Paper, bound with a single staple in the spine.

Player scores, including ball-by-ball runs, are hand-written in blue pen.